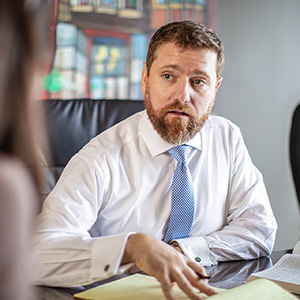 In 2008, Cullen left the publishing world to pursue a law degree from the University of California Hastings College of Law in San Francisco. After receiving his degree and moving to Knoxville, he spent six months as a UC Hastings Bridge Fellow and post-bar certified law clerk with the Knox County Public Defender’s office before opening his own practice.

In January of 2019, Cullen closed his firm to join Knox Defense, where he focuses on representing citizens accused in all manners of federal and state prosecutions and investigations. He is currently a member of the following:

Having been raised all over the world as the son of an Air Force fighter pilot, Cullen now lives in South Knoxville with his wife and son. When he’s not at work, he enjoys cycling and can often be found on his bike, riding along the many beautiful country roads of Knox County and beyond.